“As a lifelong resident of the City of Cuyahoga Falls, I have always been intrigued with the founding of our city and how it came to be,” stated Mayor Don Walters. “I am hopeful that this discovery can shed additional light on who once occupied the area that is now our city and when.”

The stone was discovered on April 18, 2022, by Richard and John Ryan, who were on a walk in the area looking for an old fishing spot that they used to visit. After noticing what was described as an “odd-shaped stone,” they realized that there was etching on the stone and then cleaned moss and brush off, revealing the gravestone. They contacted Board Member and volunteer Shawn Andrews of the Cuyahoga Falls Historical Society, who explained that the City of Cuyahoga Falls was founded in 1812. It is known that the Connecticut Western Reserve began settlement around 1796. This would place Thadius Peck in the area pre-Western Reserve.

Cuyahoga Falls Historical Society contacted the University of Akron and enlisted the help of Maeve Marino, historical archaeologist for Stewards of Historical Preservation, and Dr. John A. Peck from the Department of Geosciences to study the stone. The City of Cuyahoga Falls was contacted to extract the stone safely. Army Corps of Engineers was contacted by the City of Cuyahoga Falls and stated that there were no permissions necessary to remove the stone. Though it is currently unknown at this time how the gravestone came to be embedded on the riverbank of the Cuyahoga River, cemetery preservationist Krista Horrocks from the Ohio Historic Preservation Office is being consulted as the Cuyahoga Falls Historical Society works to research the history of Thadius Peck, his gravestone, and how the stone got there.

Members of the public interested in seeing the gravestone may do so by visiting the Cuyahoga Falls Historical Society Open House on Sunday, June 12, from 2-4 p.m. 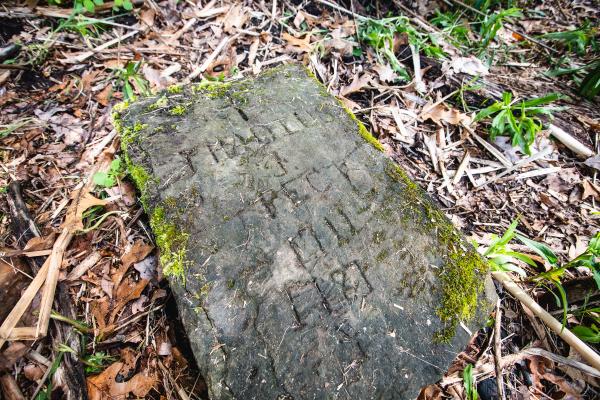