On Saturday, November 12, 2022, Mayor Don Walters proudly named Mario Caponi, of Rocco’s Pizza, as the newest honoree of Honorary Boulevard. At a public ceremony, Broad Boulevard was renamed his honor, and he was presented with a custom-made street sign bearing his name. The sign is currently displayed at the commemorative site in the median strip at Broad Boulevard and Third Street.

“Since opening Rocco’s Pizza on Portage Trail 60 years ago, Mario and the Caponi family have been amazing community partners,” stated Mayor Don Walters. “I am proud to recognize their decades of contributions to our schools, residents, and the City of Cuyahoga Falls.”

The Honorary Boulevard Street Naming Award is an initiative used to pay homage to the people and organizations that selflessly give back to Cuyahoga Falls residents and the city as a whole. To qualify, a nominee must have made extraordinary volunteer contributions to the local community, arts, environment, education, neighborhoods, health, or human services. They are recognized for their substantial volunteer efforts, time commitments, and financial donations that directly impact the betterment of the community. It is important to note this is an honorary gesture only and does not change the official designation of Broad Boulevard for postal purposes. 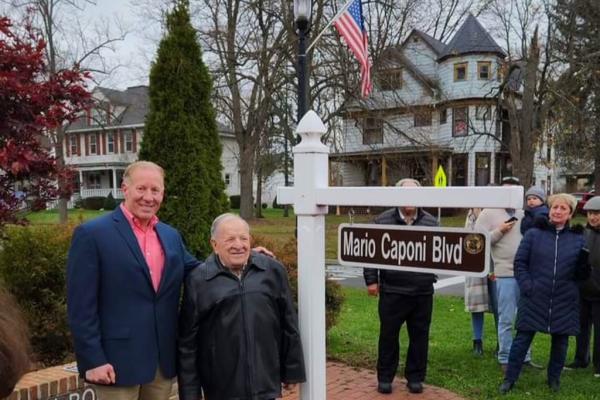